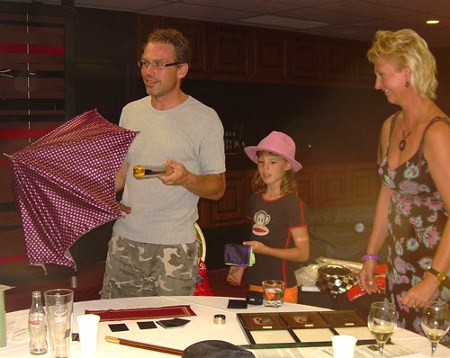 Last night I had the pleasure of meeting the owner of Harries Magic as she is visiting a friend here in Aussie land. She had brought some of her company’s props along to show us and she will attend the magic club meeting tonight to see if folks will pick them up from her. All I can say is the quality of the props is second to none. Her set of multiplying bottles were amazing. Built to last a life time. The mutilated parasol was a work of high quality and would seem to last a lifetime. She also showed us the Mental Epic and another mental effect, and they were of the top shelf quality. Now the lady Ulla, she was a class act and great fun to be around. Though not a practising magician, she is very knowledgeable and we all had a fun time. She mentioned she knew Pete Biro and Bill Palmer, and that Lance Burton uses her multiplying bottles in his act. JoJo

Â I have several Harris pieces, I like them all. Some nearly 20 years old. I was thinking recently of ordering directly from the Harris website, since dealers seem to have a hard time keeping items in stock. I was browsing the other day, the site seems to be updated since I last went there. No Signatur

Â Everything I have seen from Harries is as good as it gets. Pete Biro