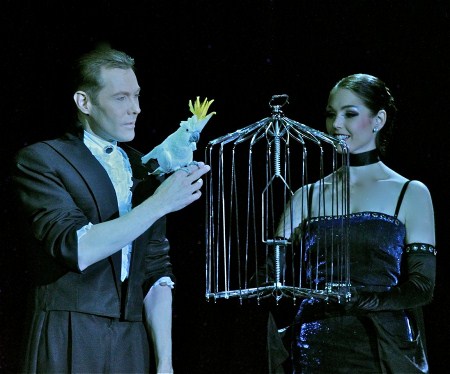 Palladium Magic: A Great Success!
Well what can we say”¦ Palladium Magic blew everyone away and with the world class stars of magic living up to expectations, the reviews are already coming in fast.Â The event, last night at The London Palladium, combined hilarious comedy acts, slick stage illusions and a variety of other interesting performances to keep the crowd guessing. The show featured Hans Klok, Mac King, Jeff Hobson, Silvan, Michael Finney, Mikael Szanyiel, Paul Zenon, Erix Logan, Nathalie Enterline, Kris Kremo and Marko Karvo who stole the show with his breathtaking act!
MagiciansUk 20th Sep 2011

The whole show was just amazing but the closing show of the first half, from Finland Marko Karvo. He was poetry in motion with not one false or wasted move.Â I’m still buzzing about it.
Graham Lee 20.09.2011

The act who Blew everyone away with his Skill and Performance. The amazing Marko Karvo with his bird productions. Just beautiful and exactly what you expect of a real magician.
20.09.2011 D.Strang

Marko Karvo & his partner Vanessa closed the first half of the show. With no disrespect to the Top Of The Bill, they equally could have closed the whole show! The magic was absolutely Flawless. Birds were produced, both small & big, flew around the audience, & back to the stage, where cages appeared out of nowhere, & the birds just hopped inside! Everything was so perfect, & was what you’d expect a ”Real Magician” to be like, both in appearance & magical content. The act drew loud audible gasps from the audience, & got a Standing Ovation! from virtually everyone in the theatre. Not one bird misbehaved, everything was faultless, a truly BRILLIANT act, & well worth all the efforts to get the permits etc to be able to appear.
M.Danata 24.09.2011

Paul Stone (The producer of Palladium Magic) must be the bravest man around, either that or the craziest!Â Allow me to explain:
Six years ago, Paul promised John Calvert (then 94 years of age) that if he makes it to 100 he will do his best to allow him to fulfill his lifelong dream of appearing at the famous London Palladium. John Calvert was scheduled to appear at London’s most famous variety theatre in the early 1950’s, as the big finale to his 40 date tour of the U.K. unfortunately for him, Norman Wisdom, who was appearing at the theatre at the time, had his show extended & John finished his tour at the Finsbury Park Empire instead.

Enter Paul Stone Year 2011:
Paul booked the theatre several months in advance, has programmes printed, with quotes in the programme like ”Tonight nearly 60 years later John will realise his lifelong ambition” & ”So when John walks out on the stage this evening, I hope you will afford him the reception that he so richly deserves” etc etc. I should point out that only a few weeks ago (if the rumours were true!) John was unwell, & it was touch & go, as to if he would be able to make the trip to attend!! Well John did attend, & at 100 years of age, even performed a bit of magic! It was a triumph for both John &Â Paul!!! Anyway on with the review of the show:

Part of the evening prior to the actual show, was Close Up Magic being performed in the bars & even in the theatre itself! All of the Close Up Magicians were introduced onto the famous stage by Paul Stone, they all took a bow, & then the show commenced:

First up was theÂ Palladium Magic Dancers, (about 27 of them!) filling the stage with a slick routine, to the song ”One Night Only” (which of course the show was!)

Paul Stone then introduces the first act which was:Â Erix Logan born in Italy, who performed some excellent illusions, including the appearance of a girl, & impaled type illusion on a giant pair of scissors! The act got a great reception from the audience.

The next act was from Russia, her name wasÂ Yelena Larkina her act was with Hula Hoops, very beautiful to watch, very slow & graceful, she even leaned forward & got the hoops spinning on her posterior (I’d never seen that done before!) Great act & again a great reception from the audience.

Next up wasÂ Michael Finney from Arizona, he was absolutely HILARIOUS! he performed his signature ”Card On Forehead” trick with a young lad from the audience, but the kid just didn’t seem to see the card, even when Michael was thrusting his forehead into the lads face!!! ”It’s an office job for you, no rocket science!” commented Michael, it just got funnier & funnier, but as they say, you had to be there, & if you weren’t, then you missed a treat (as was the WHOLE SHOW!).

Next up wasÂ Mikael Szanyiel from France (I believe.) His, was a Mime offering, totally unique, as he mimed to an Opera Piece, & the magic just ”Seemed to happen” it’s hard to describe, but I thought it was great, his bow tie kept disappearing & reappearing, even bow tie productions (like cards!) at the end, it was different, unusual & went great with the audience, who mostly had never seen anything like it! It really was a great night for ”Variety”.

Paul Stone, then introducedÂ Mac King, Mac’s show has been pulling them in, in Vegas for a few years now, & this was his London Palladium debut. He was as great as ever, very funny, with his cards across ”Cloak of Invisibility” routine, he got a great reception from the audience. It surprised me just how many ”Card Tricks” were being performed on stage during the show, but it seemed to work, because of the hugely entertaining presentations, proving yet again ”It’s not what you do, but the way that you do it”.

The next act to be introduced wasÂ Nathalie Enterline who was born in Pennsylvania. Nathalie performed a dance & mime routine, with her trade mark, hat & cane. At one point in the performance, the cane floated around her body, but nothing like a dancing cane, just the cane moved, no body movement, or hand movement, for just a few seconds, it fooled me completely. I wasn’t sure if what I thought happened, really happened! A very polished performance, again with a great reception from the audience.

Marko Karvo & his partnerÂ Vanessa Herbstleb closed the first half of the show. With no disrespect to the Top Of The Bill, they equally could have closed the whole show! The magic was absolutely Flawless. Birds were produced, both small & big, flew around the audience, & back to the stage, where cages appeared out of nowhere, & the birds just hopped inside! Everything was so perfect, & was what you’d expect a ”Real Magician” to be like, both in appearance & magical content. The act drew loud audible gasps from the audience, & got a Standing Ovation! from virtually everyone in the theatre. Not one bird misbehaved, everything was faultless, a truly BRILLIANT act, & well worth all the efforts to get the permits etc to be able to appear.

After the Interval Paul Stone introducedÂ John Calvert, flanked by some scantilly clad Show Girls, with a twinkle in his eye (reminded me of the late George Burns!), he eventually got ”settled” & even performed a trick, with silks rope & a magic wand. One hundred years young, & he truly deserved the reception that he received, even if it was 60 years late in coming, a true ”Magical legend” ………………….

Paul Zennon was next up (The only British act in the show!) he performed a gag with Linking Rings, did lots of gags, which were very funny. he then spun a pint of beer on a wooden triangle on the end of a chain, it doesn’t sound much, but it was quite entertaining! I’m sure it was enjoyed by most of the audience.

Chris Woodward was then introduced on stage, to promote his book ”The London Palladium – The Story Of The Theatre & It’s Stars” Chris also wrote up a very interesting page in the Programme for the show.

The next act to appear was Juggler,Â Kris Kremo he is a terrific juggler, but there were several times during the performance, where it was obvious that things were genuinely not going to plan. Kris persevered, & did do everything he planned to do, & probably got an even bigger reception from the audience because of it!

Ben Stone was next up, with his song that he penned himself , which has become the ”Magicares” Anthem. Magicares of course is the charity, started by Paul Stone. I first heard the song at the Siegfried & Roy Tribute Show, & I liked it then, with it’s catchy tune, & optimistic lyrics.

Paul Stone, then took the spotlight as he thanked the many people,who made the show possible. I think it was during this interlude (this is the one thing, in this review that I may have got wrong, as to be honest I can’t remember!) I think it was at this point that Magic LegendÂ Silvan from Italy was brought on, I saw someone who looked like Silvan outside the Palladium, but I thought to myself ”Surely that can’t be him? all these years later (I remember him as a child!) he shouldn’t look the same now as he did then” but when he appeared on stage, I realised that it WAS him that I saw outside, & he DOES look the same, & easily recognisable! I’m not sure if what he did on stage was planned or not, but he was cajoled by Paul to ”Do something” & he did some card productions, vanishes etc, & it was beautiful to watch, he was as engaging & elegant as ever, the legend lives on………………..

Jeff Hobson then ”Whooshed On” in a whirlwind of sequins & ”Camp!” performed some fire eating, which was very funny. He also did Card to Mouth, with a guy from the audience, & his Egg Bag routine (with a very lovely & ”Reactive” lady also from the audience). At the end of his performance, he returned watches to his spectators, that he had ”Picked” when they were up on stage with him!

I know that some people will say that Jeff’s act is not ”politically Correct” because of his portrayal of a camp gay man, but actually it IS a very funny act, & Britain (in particular) has a history of this type of comedy (& still has!), from John Inman to Kenneth Williams etc etc. His only crime seems to be that heISN’T gay! The audience (mostly) lapped it up, & the laughs were huge, & the applause was huge as well. Jeff is very very funny, I nearly wet myself…………… Nuff said!

The last act was Hans Klok.who started off with card productions & card spinning, with four dancers dancing in the background. His act had so much content (it’s now hard to remember everything he did), the act culminated in some very fast & exciting illusions, it was indeed a fitting finale to a really great show!

I do hope that Paul Stone brings another Magical Extravaganza to London very soon.