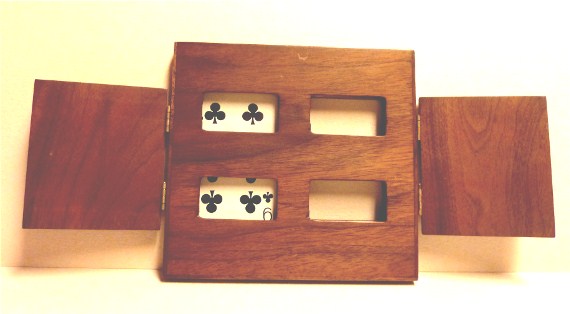 Joe BergÂ´s Sucker Sliding Card Frame.
Nothing gets the audience going better then a good sucker trick but how many are designed for adults? Most of the sucker sliding tricks are made with colorful paint and performed for children. Here is the exception. The Sucker Sliding Card Frame can be performed for people of all ages. Not only that but this one is collectable too.
Effect: A card is freely selected from a pack of playing cards. The card is placed in the attractive holder as seen in the photo. Now the fun begins. Both doors are closed. The frame is revolved to show the card really is confined inside. The performer states that the card has disappeared. He tilts the frame to the side. A loud ”Clunk” is heard. One of the doors is opened. The card is gone! The audience can see completely through the frame. The performer states ”And no, it’s not on the other side”. He closes the door then tilts the frame to the opposite side. Again the loud clunk is heard and the second door id then opened. No trace of the card. I wonder where it could be? The performer milks the rubes…I mean demonstrates the card has left the building for as long as the anticipation builds. Both doors are then flung open. The card is really gone. The frame can be turned around and shown through and through. The card is really gone. a duplicate card may be reproduced back in the deck, from a hat, from your pocket or anywhere else you can slip it into.