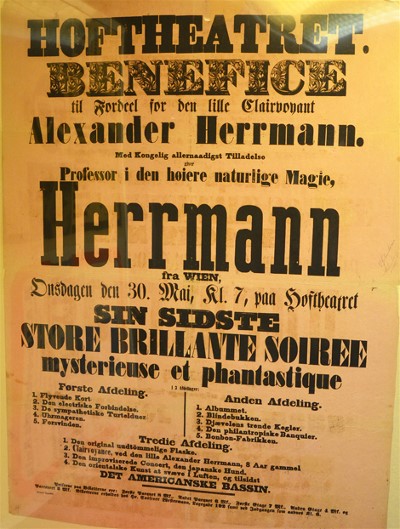 Richard HatchÂ Wow, that’s fantastic!Â Christer, it appears to be a ”benefit” for the ”clairvoyant” Alexander Herrmann, given by his older brother, Compars (Professor Herrmann from Vienna). My guess would be that it is from the early 1860s but it can probably be precisely dated from the date and weekday on the playbill. what can you tell us?

Richard HatchÂ I’m leaning to 1854 now, as the third part describes ”little Alexander Herrmann” as being 8 Â years old. He was born in 1844, so allowing for a showman’s exaggeration, the early 1850s is more likely than the mid-1860s. I wonder if this might be the earliest known playbill to feature Alexander?