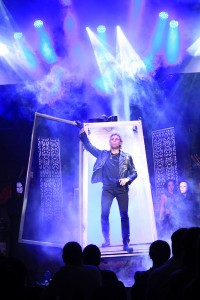 There was magic within the air in Patong last night with the grand opening of the Danze Fantasy Theatre, where illusionist Joe Labero and his troupe of dancers, comedians and acrobats put on high-energy performances and wowed the audience with spectacular slapstick and mind-boggling illusions.

The Genesis Magic Spectacular on the new theatre on Soi Bangla in Patong was international entertainment at its best, pulled off with flawless precision, humor, audience participation and seemingly impossible illusions. The audience loved every minute of the powerful performances enhanced with top-quality sound, lighting and pyrotechnics, bringing a brand spanking new breed of entertainment to Soi Bangla and Patong’s entertainment scene.

Joe Labero proved to be a true showman; cracking jokes and keeping the audience at the fringe of their seats with a mix of up-close magic and good old grand illusions, including some very dangerous disappearing acts, accompanied by a beautiful assistant and mystical minders.

The 30-strong star-studded cast of international entertainers included fun-filled, death-defying acrobatics from slapstick trio The Chicago’s, juggling from Romano Frediani and a dynamic dance troupe that took the audience on a timeless journey with curious characters and costumes.

The Danze Fantasy Theatre on Soi Bangla is a part of the recent Patong Promenade, at which the developers aim to provide several types of alternative international entertainment over the approaching months that is a part of a brand new three way partnership between Patong’s most prominent entertainment establishments, including the Tiger Group and Seduction Group.

The Genesis Magic Spectacular show times are 7.30pm and 9.30pm Wednesday to Sunday.